The Secret to Longevity

In a 2017 TED Talk, psychologist and Wall Street Journal science columnist Susan Pinker read that, in developed and wealthy countries, men were more likely to die before women, and women were more likely to live longer by six to eight years. The only place Pinker found where men live as long as women: in a remote village in the mountains of the Italian island of Sardinia. There, the village has more than 10 times as many centenarians (people who live to be a hundred years old) as North America.

During her research in that area, she found that the secret to their longevity had nothing to do with diets or personality, but their close personal relationships and face-to-face interactions.Twenty-five percent of their longevity had to do with genetics, while other external factors most likely played a role, but most of it was due to social interaction. Women lived longer than men because women were more likely to value social interactions over men during their lifespan.

Among the centenarians she interviewed, many of them have a lot of family members to socialize with. In fact, the way the village was constructed in a way that the villagers’ lives constantly intersected, so there was hardly a moment alone outside.

According to Pinker, social importance changed during the Industrial Revolution. In a time where diseases were easily spreading, those who could tried to live away from others until such time it became a norm for most houses. However, the consequence of this now is that more people are more prone to social isolation, especially in developed countries.

Today, you may have only two or three people you can trust. Your family may be a given on that list, but not your entire family. Pinker’s trip to Sardinia showed her that these centenarians were more likely to live longer because it was almost always like a party in their homes.

Researcher Julianne Holt-Lunstad conducted a 2010 study to determine the quality and quantity of life affected by social relationships. Using tens of thousands of middle-aged people, she examined various their demographics, lifestyles, and other factors that could affect their lifespan. After seven years, she determined the 10 top factors that attribute to a longer lifespan. In order from least to greatest, the top eight were:

The top two that were most likely to expand a person’s lifespan involved a person’s social life. The first one involved close relationships. These relationships do not automatically mean family. These are the people you can talk to without hesitation, especially during your time of need.

When you’re in trouble or need to get something off your chest and look for someone to call, do you have that one name on your contacts list you go to without question, do you wonder which person you can best talk to, or you grab your phone and put it back down realizing you don’t have anyone to call? It’s having this kind of close relationship that can improve your lifespan.

Another factor is how much you interact with people throughout your day. Whether you stay cooped up at home alone, go hours without talking to anyone, or put on a kind and sociable face for everyone can have a huge impact on your health. These relationships include both the close relationships you have and the strangers and acquaintances. Even just small talk with a person on the bus can affect your lifespan. 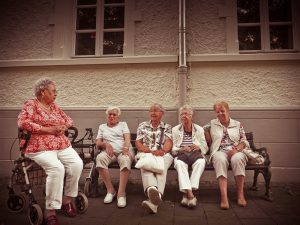 However, socialization can only go so far in the digital era. According to Pinker, face-to-face contact releases neurotransmitters such as dopamine that helps reduce stress and provide a positive impression. Simply making eye contact and making physical contact increases your trust, lowers your blood pressure, and reduces your pain.

It’s these effects that produce morphine and lower your health risks. Your social relationships serve as a barrier against certain physical and mental illnesses, and you can’t get the same effect from reading words off a screen.

Elizabeth Redcay, a neuroscientist at the University of Maryland, examined the brain activity when performing social interaction and when watching a static screen. In one group, she and a group of participants had a dynamic discussion, while a second group watched the same conversation in a video.

The results were that there was more brain activity during social interaction than there was watching a video. It’s because humans perceive and react better to socialization. According to a study by Nicholas Epley at the University of Chicago Business School, people who hear your voice think you are smarter. It’s one of the main reasons why most job interviewers require a face-to-face interview with an applicant since personal socialization may tell more about a person than what they write on paper.

No man is an island, and we have the studies to back it up. By performing more face-to-face social interactions and creating real relationships offline, people are more likely to feel less lonely and live longer.If you feel like you haven’t made strong enough relationships, this is one reason that should motivate you.